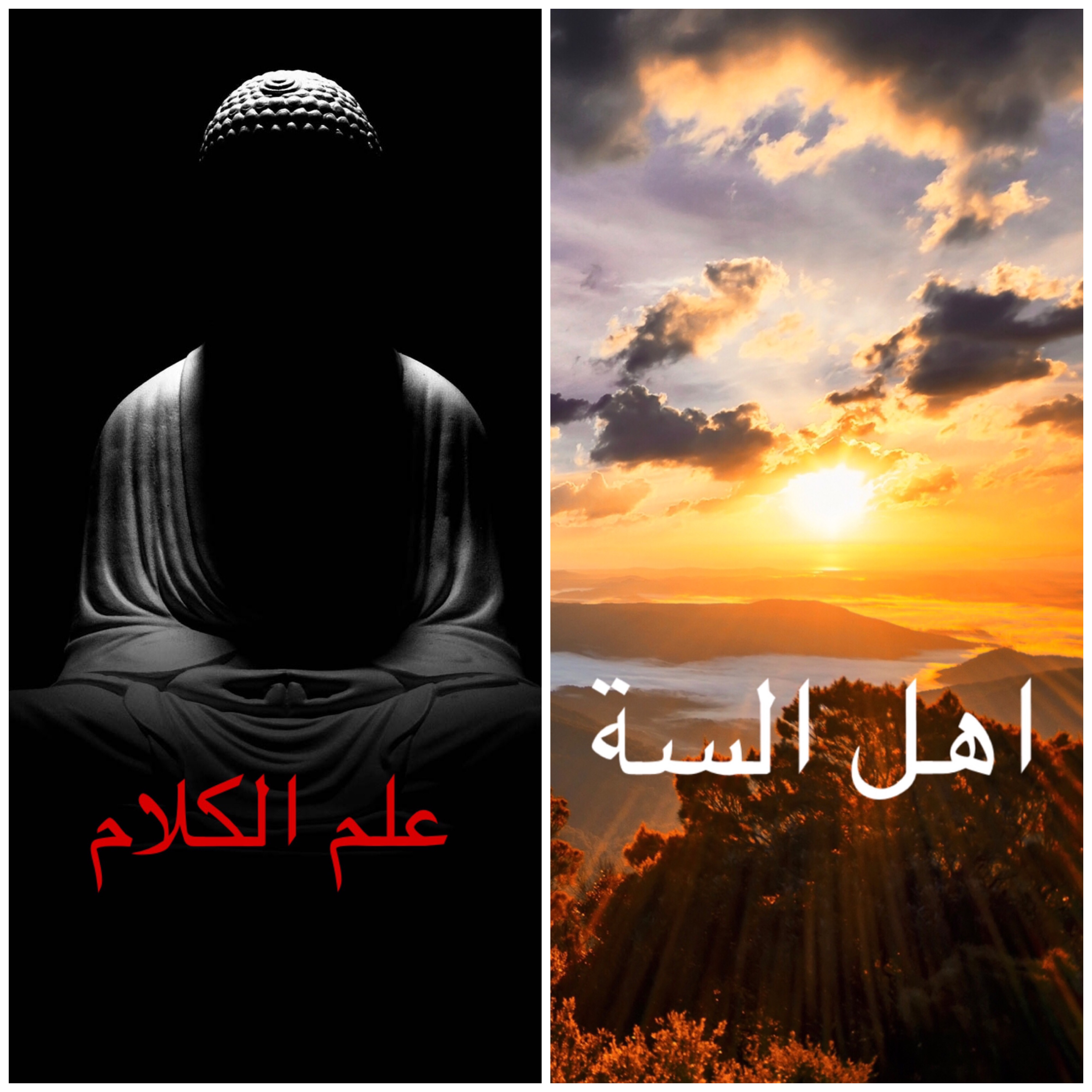 The following research material was provided by various researchers and expanded on with additional commentary by myself!

Some of our brothers at times, among bandwagon Ash’aris and Maturidis along with their kalamist influenced atharis, would demand a definition of some Sifat from a traditionalist who believes that the meanings of sifat are known.

The problem posited by this group of people is what they are asking for is a tahdid, i.e. a specifically defined definition while they dont realize it, which is tantamont to the salaf’s conception of kayfiyya. To resort to a dictionary will be erroneous because dictionaries focus on particulars and not universals … So for example, lets take the most commonly asked about sifa,

This will be translated as جارحة “a limb” … So whoever answers this faulty question using a dictionary shoots himself in the foot and falls into tajsim.

Many lexicographers are also influenced by theological kalamist schools whether it be al-Jahidh or others. This helps us contextualize why mutakalimun mistakenly believed that the apparent “meanings” (dhawahir) of the revelation denotes blasphemy. Because to them, the apparent “meanings” (dhawahir) they viewed as entailing a denotative definition (الحد التام) which would in fact be takyif (applying descriptives to the unknown nature of the reality of Allah), which is patently false because the salaf made a distinction between the m’ana and thus the dhawahir with tahdid (الحد التام). This explains why the salaf confirmed a mandatory belief in the dhawahir while simultaneously dispelling knowledge of the nature (kayf/takyif) of Allah’s actuality of His Sifat.

When confronted with such challenges at definition, we define sifat with their:

” Sight” the opposite of ” not seeing”

Attempting to define the sifat in line with dictionary meanings may lead to anthropomorphism/similitude to creatures. That is because dictionaries do not attempt to define things upon the basic parameters of dhawahir, rather the function and role of dictionaries typically serve to define things on a more denotative characteristic. In other words, they delve into the kayfiyya (takyif).

The reason for the faulty inquiry asked by both bandwagon Ash’ari and Maturidi cheerleaders and the few atharis who agree with their conceptions on this very topic regarding their stance on adopting tafwid bil-m’ana is based on a more fundamental matter.

Anyone who studies مبادئ المنطق would learn that there are different types of definitions. (see the sections on التعريف والمعرّف). The kind of definitions WHICH BOTH the Mutakalimun and the Atharis follow when it comes to Allah’s Sifat is the connotative definition (الرسم التام, perhaps even الرسم الناقص), and not the denotative definition (الحد التام) which involves delving into the essence of the defined thing. And the problem here is that all lexicography/dictionaries follows the method of making tahdid via الحد التام. Thus following a dictionary would defacto fall into the salaf’s prohibition of entering into the kayfiya.

This in fact, may be thee fundamental elephant in the room between traditionalists (salafi theologians) and mutakalimun (Ash’aris, Maturidis, M’utazilah, Mufawid Atharis), because all of this camp of mutakalimun INCORPORATE الحد التام INTO the framework of “m’ana” whereas the traditionalists follow the salaf’s distinction in separating the kayfiyya from the m’ana. This is because the idea of “m’ana” i.e. meaning, is an umbrella topic which includes the various forms of hadd (listed above) which essentially goes into takyif.

So “descent” simply means a shift from a higher level to a lower level. “How”? We don’t comment. We don’t say that Allah moves through space to reach the lowest heaven. This definition would be the kalam argument that mutakalimun would impugn on traditionalists when confirming Allah actually does Nuzul. However this would be patently false because this is not what we would confirm as the meaning nor would we confound Allah or His Attributes to creational properties in the way the mutakalimin would argue would necessitate the dhawahir of the Attribute’s meaning and thus negate the apparent meaning of the sifa and offer to make a t’awil of it. Keep in mind, the kalam meaning of t’awil is not simply “to explain”, rather the kalam intent of the term “t’awil” is to carry the word away from its preponderant meaning understood in the language of the Arabs into a far fetched/improbable meaning not understood in the language of the Arabs.

Ibn Taymiyyah himself said that it is possible that Allah splits the space time continuum for the first heaven to be reached (i.e. Allah doesn’t enter space to achieve this). Again, it’s all “possible”, we don’t delve into this stuff.

The problem with the Mutakallimun as many have said repeatedly is that they insist that their arguments are so definitive and water tight, while in reality they are nothing short of speculation.

The same applies with Allah’s ‘Uluw. Allah only has a single dimensional relationship with the creation (i.e. below Him). There is nothing to His right, left, front, behind, or above. According to the classical Aristotelean definition of place, Allah doesn’t count as being in a place because He’s not encompassed, as Ibn Rushd clarified. Even my colleague’s kafir philosophy professor found Ibn Taymiyyah’s position very interesting and said that philosophers have not delved enough into such a stance in order to hold any confident stance on it. It’s simply unfathomable and beyond our comprehension.

Allah laughs. What is laughter? Laughter is an *act* performed to exhibit amusement/satisfaction, etc. at a certain thing. Does Allah have cheek bones? No. This is diving into takyif right now.

Laughing is an “act” that is done “in a point in time”. Similar to how the Messenger ﷺ says that on the day of Resurrection, Allah will become Angry unlike ever being angry before”. This denotes entering a state of anger unlike previously. This entails Allah’s acts happen temporally. Does this then mean that we are now confining Allah into the space time continuum such that Allah is encompassed and strangled by time as mutakalimun would posit? No. Their arguments are actually what is entering into takyif, the very thing the salaf vehemently warned this ummah NOT to delve into.

And we can go on and on and on…. with every Attribute mutakalimun have a problem with in confirming for Allah.

In conclusion, It’s very easy to define things by stripping things related to the modality and essence from their definitions. You simply need to look at them from a connotative perspective (i.e. what is being implied by the verb/adjective/noun in question).  But again, the Mutakallimun have expressed a form of stubbornness that we can easily bypass their speculative and shallow arguments, so they want to pretend like we speak gibberish by reiterating like parrots…. “But what do you mean???? But what do you mean?????” Because what they are asking for is the takyif, the nature and reality of the Attribute as the “meaning”. They are actually similar to the innovator who asked Imam Malik “how does Allah istawa over the Throne”, Malik clearly lambasting the questioner as

2. The istawa is clearly known, and we relegate how it is to Allah

The point here being that the constant questioning “what is the meaning of the sifa” is after its الرسم التام i.e. connotative meaning is known is essentially behavior akin to the questioner in Malik’s case asking HOW the sifa is actually is. They are actually asking for the kayfiyya either ignorantly or to deceptively acquire a tajsimi answer from an ignorant who is not aware of these matters in detail to be able to answer the inquiry.

A Practice of Tafwid between the Salaf and the Khalaf. The Case of Abu Zur’a ar-Razi رحمه الله versus Imam an-Nawawi رحمه الله

1. Tafwid al-Ma’na (relegating a meaning to God and not even affirming the apparent meaning of the Word), a case of the muta’akhirin

It is for instance said: We believe that the Merciful did Istawa (as it befits His Majesty) over the Throne, and we do not know the reality of the meaning of this nor what is meant by it (ولا نعلم حقيقة معنى ذلك والمراد به), while we do believe that {“There is nothing like Him whatsoever” Qur’an 42:11} and that He is exalted far above Hulul (directions) and Huduth (created things). That is the way of the Salaf or at least their vast majority, and it is the safest because one is not required to probe into such matters. When we believe in His exaltedness then there is no need to probe in it.

So here Nawawi affirms that he believes in this verse of “ISTIWA” but he doesn’t know the meaning of it. In short, the apparent meaning of the word “ISTIWA” is “to rose above”, but he deliberately omits to select any meaning.

So he was asked of the verse :   {الرَّحْمَنُ عَلَى الْعَرْشِ اسْتَوَى}. He got angry and said :  Its explanation (meaning) is what you have recited, that He is [actually] over His throne and His Knowledge is omnipresent. And whoever says other than that upon him is the curse of Allah.

Here, Imam Abu Zur’a affirmed its apparent meaning and abstained from discussing the mechanics of how He Rose over his Throne, where as Imam Nawawi (from Mutakhireen) refrained from even explaning and affirming any meaning to “Istiwa”.

The Most Prolific Fallacy of Tafwid Being Applied to M’ana

The mufawwid argument, that is the promotion of tafwid bil-m’ana, is based on a historical reality that never existed. If the salaf did not truly know the meaning of the versus, then they would have never opted to adopt a policy of vehemence against kalam theology in the first place. In fact, they would not have even deemed them innovators. A declaration of heresy cannot be made over what is intrinsically “unknown”. You cannot declare someone an “innovator” if you hold that the thing for which there heresy is attached to is itself “undefined” as that would be dhulm. But this is exactly what the lazim here implies if we were to accept tafwid in m’ana as a correct methodology and then saying the salaf held this policy.

The entire nature of their opposition RESTS upon the salaf knowing the meanings of what Allah intended which is why they declared as heretics, those who offered divergent meanings from the intent of the Speaker, i.e. Allah. If the salaf adopted this developed policy of “ignorance” for the meaning of Allah’s Attributes, then on what basis did they even oppose kalam theology and rendering it as a heresy from the orthodox way????  Had Al-Awza’i not known the meaning of istawa, then he would have never deemed the claim of j’ad bin dirham that the meaning meant something else entirely for istawa. Yet the basis for his opposition was based on them offering meanings not intended by the Speaker. How can they do this, if they did “not know” the meaning themselves. Its a catch 22 invented methodology of later generations that was never a policy among the early generations of ahlu-sunnah wal-jam’ah.

They did not argue “oh qadhi abdul-jabbar, why did you specify istawa as istila, you should have kept it undefined and remained silent like us”.  The nature of their vehemence against these innovators entails that they opted to meanings NOT known among the Arabs and what they understood from the intent of the Speaker, which was istawa ala, as a haqiqiya, as many of them confirm, with His dhat, as ibn abi shayba and ibn abi zayd confirms.  All of this crumbles if the idea that the salaf did not know their meanings is asserted as a methodology of ahlu-sunnah. Yet, history reveals otherwise, which means the developed claim is wrong, or the salaf are wrong.  We opt that this modern development is actually incorrect, even if some from our own school may have adopted it.